On June 18, McDonald’s Philippines launched the “BTS Meal,” a global collaboration with the all-male K-pop group BTS. To ensure that the meal frenzy in Indonesia earlier this month doesn’t occur in the Philippines, McDonald’s even coordinated with local authorities.

Meanwhile, in the weekly charts of iTunes and Netflix Philippines, K-pop and K-drama titles are topping the lists. Content from countries with a much influential popular culture like the United States don’t even match the “clout” attached to South Korea’s cultural exports, much less from Latin America or Spain.

We previously reported that Latin American telenovelas used to dominate the Philippine airwaves in the ’90s, but now the roles have been reversed. Telenovelas became less and less common in the late 2010’s and were eventually replaced by “Asianovelas,” especially K-drama.

But that’s just the tip of the iceberg as the “Korean wave,” or “Hallyu,” with its dashing actors and “idols,” didn’t just sweep the Philippines off its feet — it already is a global phenomenon. More and more people are learning Korean because of K-pop and K-drama’s immense popularity. According to Duolingo’s first Global Language Report, Korean is the most-studied language in the Philippines in 2020, with Spanish following only in the second place.

If promoting Spanish is crucial to learn more about Philippine history, South Korea’s soft power poses a big challenge to the vanguard of the “Hispanismo” and “Hispanidad.”

In a series of year-old Facebook posts by Suzette Doctolero, a script writer from GMA Network, she said that the government of South Korea had invested a lot of resources in promoting its popular culture.

Doctolero went on to say that the production of K-dramas is tax-free and that the shooting locations are free to be used by media production companies in South Korea. She also wrote that the Korean government even funds their artists’ education in filmmaking. The result? K-pop and K-drama are now a billion-dollar business, and their huge appeal has translated to other industries such as retail, fast food and the language learning business.

According to the BBC’s Christine Ro, the Korean wave “hasn’t happened by accident — it was a deliberate government plan.”

The Vanguard of Hispanismo Needs To Catch Up

Instituto Cervantes, the cultural arm of the Spanish government, does a fine job of promoting Spanish language and culture worldwide. But still, Madrid has yet to tap on popular culture like what South Korea did.

Latin music in Spanish language surprisingly became popular in 2017 after the bilingual reggaeton track “Despacito” became viral. Since then, there have been a surge of bilingual collaborations in the United States. American musicians Nicki Minaj, Demi Lovato, Selena Gomez, Camila Cabello, Billie Eilish and Katy Perry didn’t pass up the chance to dip their toes into the music industry’s latest trend.

“Yes, this is a big deal, and it’s important to note that the previous years had far less Latin representation,” wrote Erica Lahmad at BeLatina.

But despite its meteoric rise, Latin music hasn’t yet made a significant impact to encourage young people to study Spanish — unlike what the Hallyu successfully does to K-pop and K-drama fans. “Latin music has been a very recent phenomenon,” argued Angela Wang, who made an analysis on the emergence of Latin music. Wang may be right: Latin music doesn’t even have a mainstream status in the Philippines.

As for Latin American telenovelas, the once-strong contender to K-dramas in the Philippines, they are a thing of the past for Filipinos. Rarely you can see them on free-to-air television — aside from Telenovela Channel on cable — with the proliferation of K-drama and Boys’ love series.

The vanguard of Spanish language and culture should start looking at the power of mainstream popular culture. What could possibly rival K-pop? What could match K-drama? Unlike in Hallyu fan communities, it’s disappointing to find out that there are no BTS or Blackpink in the Spanish-speaking world. There might be Rosalía, J Balvin, CNCO and Luis Fonsi, but the community doesn’t have an icon who has the same level of global influence and reach as the K-pop idols.

To make Spanish an overnight success in the Philippines, the vanguard of Hispanismo needs to catch up with South Korea. It’s time to embrace Latin music. 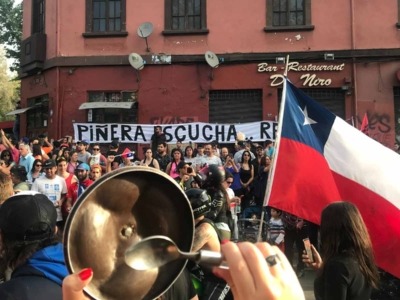 Editorial: What Can Filipinos Learn From Latinos When It Comes To Protesting

The last couple of years saw a surge of protests across Latin America. Filipinos should ...
By JF Staff
Jan 25, 2021
0 %