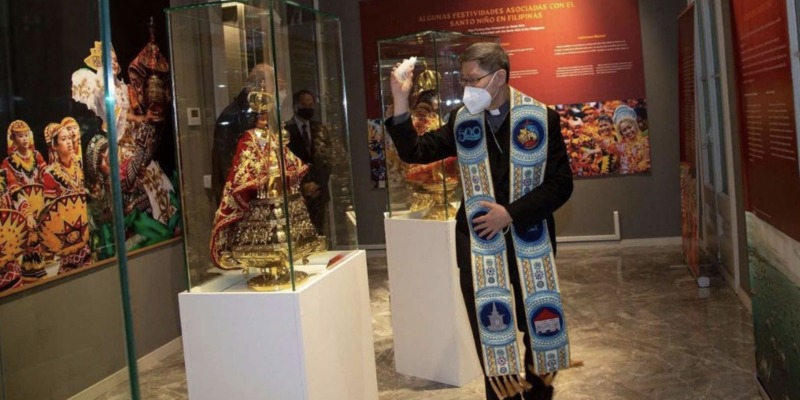 Cardinal Luis Antonio Tagle blessed the religious objects. He then encouraged the youth to “profess their faith in Christ” and challenged them to “become priests and nuns to be part of the evangelization of the Catholic faith.” For the Filipino community in Spain, he urged them to “share the gift of faith, as it has been shared to us 500 years ago.”

Philippe Jones Lhuillier, the Philippine Ambassador to Spain, said that the exhibit aims to bring the Santo Niño to a wider audience, including both Filipinos and Spaniards, according to a news release by the Department of Foreign Affairs. “Spain has gifted us with Christianity. Through our devotion to the Santo Niño, we gift Spain with our Catholic faith, which has been our pillar of strength and has seen us through difficult times,” said Lhuillier.

Consul General Maria Theresa S.M. Lazaro of the Philippine Consulate General in Barcelona emphasized that the exhibit is a “glimpse into our history and our Catholic faith.”

Officials from the Archdiocese of Barcelona and other Catholic churches in Catalonia, as well as local government officials, heads of academic and cultural institutions based in Barcelona, and members of the Filipino community, attended the said event.

“Santo Niño de Cebu: Un icono de la historia filipina,” which is presented in collaboration with the National Historical Commission of the Philippines, will be open until May 31 during weekdays from 9 a.m. until 4 p.m.

In December, the Santo Niño de Cebu “returned” to Spain after 500 years as an exact replica of the Catholic relic has been sent to the said country.