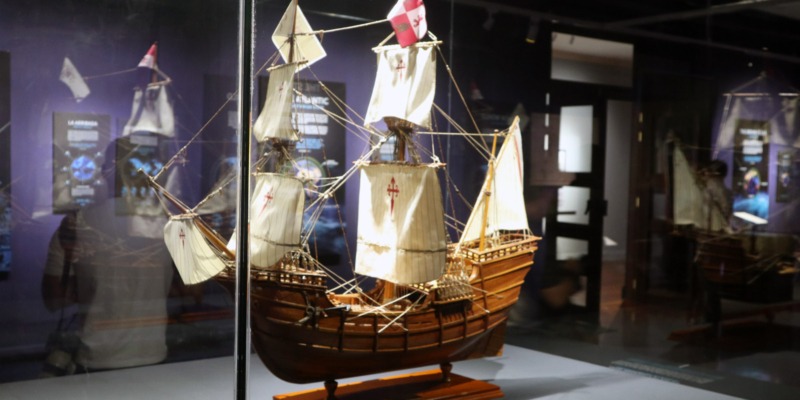 Model of Victoria, the only ship out of the original five to return to Spain

Through a display of antiques, relics, specimens and facsimiles, the abridged exhibition commemorates Ferdinand Magellan’s first circumnavigation of the world. The original and unabridged display launched in 2019 in the Archivo General de Indias in Seville, Spain. A traveling version of the said exhibition has also been shown in numerous locations across the world during the previous two years.

In the Philippine edition, the circumnavigation is presented in 14 sections, which also includes facsimiles of some original archival documents, such as the contract between Carlos I and Ferdinand Magellan. A model of the Victoria, the only ship from the original five to return to Spain, is one of the highlights.

“In this exhibition, we hope to [build] international perspective, and we [gain] the perspective of our friends in Spain … and to contextualize what’s being celebrated in this country,” the director of the museum, Jeremy Barns, said in a press conference Monday.

The museum said that it collaborated with the Ambassador of Spain to the Philippines, Jorge Moragas Sánchez, making him a special guest curator. The organizers also worked with the Spanish curatorial team to provide information not found in any other edition of the exhibition, in Spain or anywhere else in the world. Among them are a variety of archaeological, ethnographic, and devotional art pieces, as well as natural history specimens of flora and animals selected from the National Museum and the Intramuros Administration’s collections.

(“[The exhibition provides] the opportunity to explain the importance of the voyage and above all, the important role that the Philippines played in it — in all the evolution of different stages and which was an essential element in the framework of the very deep friendship between our peoples, between the Philippines and Spain, which also managed, through that voyage, to make the first circumnavigation of the world come to fruition. And therefore, to facilitate communication between our two countries and between our continents, between Asia, America and Europe.”)

(“To have met in the framework of that navigation, of that voyage that was destined, was directed to a commercial route to what is today Indonesia, the Moluccas, but thanks to it, we met two peoples and the friendship was formed from there.”)