Filipinos love Spanish-influenced food: They want a taste of paelya during special occasions and even add adobo to their regular diet.

Fortunately, there are many Spanish foods in the Philippines that have now become part of the distinct Filipino cuisine. I’m not talking about adobo or afritada, which, though of Spanish origin, became different dishes altogether. For instance, the Filipino adobo deviated from the original. Likewise, kaldereta looks different from caldereta.

Ahead, we’ll look at the local variations of some Spanish foods in the Philippines. Although the Spanish elements have already been mixed with the local flavor, they remain somewhat visible.

The Filipino paelya is a localized version of paella, a pride of Spain. It’s now become among Filipino’s favorite dishes during special occasions. When Filipinos talk about paelya, however, they mostly refer to the paella valenciana, a version of the dish from Valencia.

But in truth, there are other variations of paella in Spain: paella negra, paella mixta, paella de mariscos and paella de verduras, among others. In the Philippines, we have bringhe, paella de adobo and many more.

This is a sweet “merienda,” or snack, which originated in Spain and was brought to former Spanish colonies like the Philippines and Latin American countries.

Churros come in many flavors, but caramel and chocolate are the most common. It’s very popular in Spain and Mexico, and somewhat in the United States. Although it’s not a nationwide sensation in the Philippines, there are many churrerias, especially in Metro Manila. You can also find vendors selling them on the streets.

This is another Spanish food that has a local version.

Calamares is a fried squid usually eaten as a snack and is typically dipped in vinegar. The name comes from the Italian word “calamari,” which means “squids.” In Spain, it’s one of the favorite tapas. In the Philippines, on the other hand, it’s usually sold as a street food.

Locally, in some provinces, it’s known as longganisa. Chorizo is a pork sausage, and the Filipino version has many regional varieties such as chorizo de cebu and skinless longganisa, among others. It looks a lot like the original from Spain.

Interestingly, there’s also a Mexican version of chorizo. The main difference among all these variations of chorizo is the cooking method.

This one is a dish made from ox tongue, and it’s considered a classic Filipino food adapted from a similar dish in Spain. In the Mediterranean country, however, they don’t use an ox’s tongue. Instead, they use that of a cow; this is why it’s commonly called lengua de vaca there.

Did you know that Filipinos’ budget food — the Spanish-style canned sardines —  somewhat has links to Spain?

The sardinas españolas is not served with tomato sauce, but sometimes, it’s sold in cans. Likewise, it comes in different variations; the most common is sardinas españolas en aceite de oliva. One example of this is a product from Matiz Sardines.

In Spain, they have the ensalada de berenjenas, which is a lot similar to the ensaladang talong. This dish can be cooked in different ways, and it’s usually eaten during summers. Then of course, ensalada de mango also exists there, though it’s a different kind as they usually use ripe mangoes.

Ensaymada is one of many favorite breads of Filipinos. It can almost be found anywhere, especially in neighborhood bakeries.

It traces its origin from Mallorca, which is located at the Balearic Islands in Spain; the bread is considered traditional on the said island. In Spain, they call it ensaimada mallorquina or just simply ensaimada. However, in Latin America, it’s called pan de mallorca or just mallorca.

Empanada traces its roots to Galicia in Spain. It’s typically popular in Ilocos Norte and Ilocos Sur, provinces in the north of the Philippines. Vigan is also where the Calle Crisologo, a street that features Spanish colonial houses, is located.

This food is also a staple in many countries in Latin America.

The list of Spanish foods in the Philippines — and their local variants — aforementioned shows the irrefutable influence of the Spanish colonial era in the country. From Mallorca and Cadiz, to Valencia and Madrid, Spain’s influence indeed runs deep.

Do you know of other Spanish foods in the Philippines? Let us know! 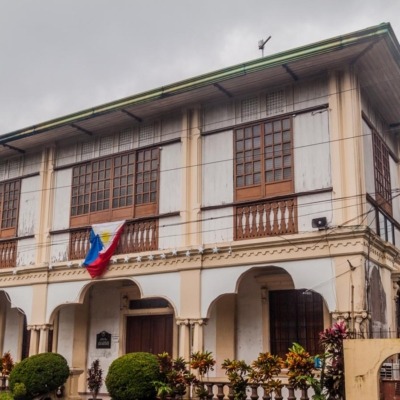