A student who enters the University of Santo Tomas Library will notice that its name has a clear Hispanic resonance — that of Miguel de Benavides y Añoza from Carrion, who was precisely the university’s founder.

But who was he, and why did he travel half the world away?

Miguel de Benavides was born around 1550 to a noble family in the now minuscule “city” — since it holds such a title — of Carrión de los Condes (Palencia). In 1567, he entered the convent of San Pablo, in Valladolid, as a postulant in the Dominican Order. In the said convent, he received the habit of a Dominican and made his profession. He later began studying Arts. During these years, he distinguished himself for his great talent and capacity for theology, as well as for his attitude as a Dominican religious. Later, he moved to the University College of San Gregorio, in the same city of Valladolid, to perfect his studies of Philosophy and Theology. When he finished his studies and was ordained a priest, he began his teaching work: his first professorship was in his own convent of San Pablo. About 1588, he moved to the Royal Convent of Saint Thomas in Avila where he worked as Master of Students, a job reserved to people of proven spirituality and high science.

It seemed that his life was going to be set on the path of teaching when he answered the call for volunteers to form a new Dominican province in the Philippines, recently conquered, leaving for Mexico on July 17, 1586.

Arrival in the Philippines

In Mexico City, while the arrangements for the trip to the Philippines were being made, Fathers Juan de Castro (Vicar General), Juan Crisostomo and Benavides himself drafted the bases of the new missionary province dedicated to Our Lady of the Rosary. Benavides finally arrived at the port of Cavite on July 21, 1587.

Just one year later, in June 1588, the first Provincial Chapter was held. Father Juan de Castro was elected Provincial. The missions for Bataan and Pangasinan were accepted, and the first missionaries left for them. However, Benavides remained in Manila. Due to commercial relations, a considerable Chinese colony had been established in this city. Hence, Bishop Domingo Salazar and Father Provincial considered it convenient to evangelize it and assigned Father Juan Cobo and Benavides to it. Because of this, they learned their difficult language, and soon they understood the people and preached in Chinese; they were among the first missionaries in the whole world that evangelized the natives in their own language. Soon after, the first Chinese were baptized in the church of Santo Domingo, being their godfather the governor Santiago de Vera.

Later, with the support of other missionaries, the St. Gabriel Hospital was built for the Chinese, which gradually acquired a good reputation. It then expanded and became known and appreciated in China thanks to the services they provided to the merchants.

The Dominican Province of Our Lady of the Rosary has always had as its goal the evangelization of mainland China. With this purpose, Benavides and Father Provincial Juan de Castro arrived in Fujian in 1590, but were imprisoned in Xiamen (Amoy) on charges of espionage. At the trial — to everyone’s surprise — Benavides defended himself in Chinese, and thanks to this they were able to explain their good intentions. However, they were expelled and had to return to Manila. By that time, Benavides was also fluent in several Filipino languages and had written a Chinese-Tagalog-Spanish dictionary.

In 1591, he accompanied Bishop Salazar to Spain to seek his elevation to archdiocese and the creation of the dioceses of Nueva Caceres, Cebu and Nueva Segovia. On this trip, they also brought to the Council of the Indies and King Philip II the abuses that the civil authorities were committing against the natives and the proposal of a plebiscite among the Filipinos to obtain their free acceptance of Spanish sovereignty. During his stay in Spain, Benavides served as Procurator General and as such attended the Order’s General Chapter held in Venice in 1592. He also devoted himself to recruiting new volunteers for the Philippines.

In 1595, Pope Clement VIII granted the division and elevation of dioceses that they had requested, and Nueva Segovia Benavides was designated as their first bishop. Benavides organized from then on the commissions that traveled through all the regions of the archipelago to gather the response of its inhabitants to their free acceptance of Spanish sovereignty, the vast majority of which complied with the dominion of Spain. It also reorganized the administration of the islands and established a system of taxes on imports.

In August 1598, the Archbishop of Manila Ignacio Santibáñez, successor of the first Bishop Salazar, died. Benavides was appointed to succeed him, but the bulls of Pope Clement VIII did not arrive until August 1603. For Benavides, the work of evangelization was as important in the vanguard as those of study and teaching in the rear. For this reason, he always tried to instill the reading of the Holy Fathers, the councils and reflection on these readings.

As Archbishop of Manila, Benavides was given the task of organizing the dioceses of the archipelago and proposed to the King and the Pope the convenience of establishing a school in the city.

Benavides died in Manila on July 26, 1605. His funeral, celebrated with great solemnity, was attended by religious and civil authorities as well as by numerous faithful who bid him farewell as the father of the poor and oppressed. He was buried in the cathedral of Manila, but his remains were moved to the church of Santo Tomas in 1612. Like all good missionaries, he was buried in that land that ended up being his for the rest of his days.

In his will, Benavides bequeathed the amount of PH₱4,000 and his personal library so that Fathers Domingo de Nieva and Bernardo de Santa Catalina — with the help of other later donations — can establish the Colegio de Nuestra Señora del Santísimo Rosario (1611), initially conceived as a seminary for the formation of future priests. Later, it was called Colegio de Santo Tomas. In 1624, it was authorized to teach academic subjects in Theology, Philosophy and the Arts. In 1645, Pope Innocent X elevated its status to University of Ecclesiastical and Civil Studies.

In 1680, it was placed under the patronage of the King. In 1785, Charles III granted it the title of Royal for the exceptional loyalty shown by the administrators and students in defending the city of Manila against the attack of the English. In 1902, it was designated a Pontifical University by Pope Leo XIII. In 1947, Pope Pius XII granted it the title of Catholic University of the Philippines. Today, it is known as the University of Santo Tomas and is the oldest in all of Asia.

A bronze statue, sculpted in Paris in 1889, was erected on the campus in his memory. Another statue stands in his hometown, in front of the church of Santa Maria. Carrion’s municipal library also bears his name. 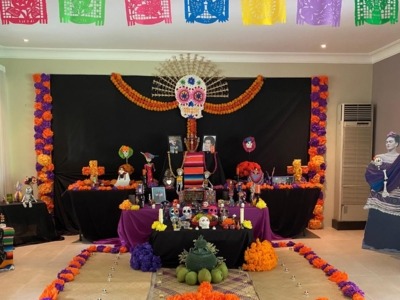