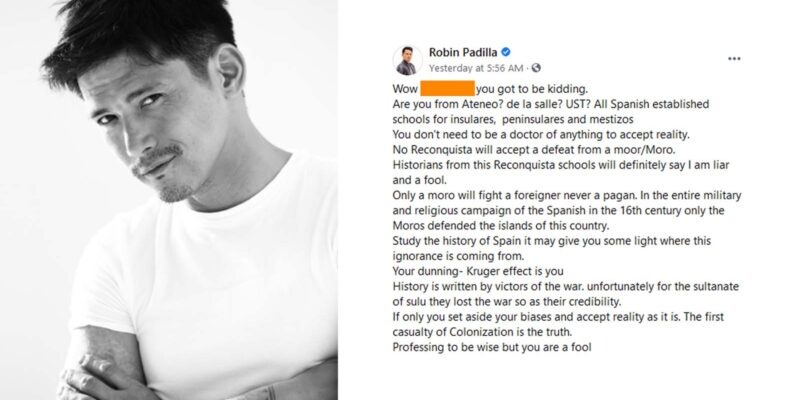 MANILA, Philippines — Actor Robin Padilla told a Facebook user to “study the history of Spain it may give you some light where this ignorance is coming from” after he was criticized for defending a politician’s remark that Lapulapu is from Sulu.

On Saturday, a Facebook user commented on a post by news website The Filipino Times, which shared a link to a story that Padilla defended the lawmaker’s statement, saying that the actor is “a prime example of the Dunning-Kruger effect.” The social media user’s comment was accompanied by a quote from the website Science Direct, explaining the said cognitive bias.

“Wow (redacted) you got to be kidding. Are you from Ateneo? de la salle? UST? All Spanish established schools for insulares, peninsulares and mestizos … No Reconquista will accept a defeat from a moor/Moro. Historians from this Reconquista schools will definitely say I am liar and a fool. Only a moro will fight a foreigner never a pagan. In the entire military and religious campaign of the Spanish in the 16th century only the Moros defended the islands of this country. Study the history of Spain it may give you some light where this ignorance is coming from. Your dunning- Kruger effect is you,” the actor said.

Padilla also expressed that “history is written by victors of the war” and told the social media user if they can only “set aside your biases and accept reality as it is. The first casualty of Colonization is the truth.”

“Professing to be wise but you are a fool,” he ended.

“De La Salle University (DLSU-Manila) was founded on June 16, 1911 during the American era … It was not established during the Spanish period by the Spanish friars. These are irrefutable historical facts,” they wrote in a Facebook post on Sunday.