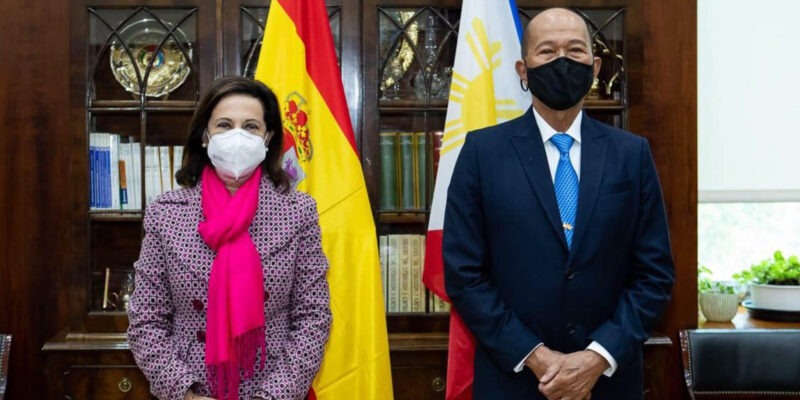 MANILA, Philippines — The Philippines and Spain signed an agreement on the protection of classified information in the field of defense Thursday, Nov. 4.

Philippines’ Department of National Defense and Spain’s National Intelligence Center signed the agreement in Madrid. Spain’s defense ministry described the agreement as a “first step to strengthen bilateral Spanish-Philippine cooperation,” and said that it will “facilitate the development of industrial relations, among others.”

No other information about the agreement has been released at this time.

In the meeting, Robles thanked the Philippines for its “efforts to continue contributing to the preservation of the Philippines and Spain’s common history.” She particularly highlighted “the closeness and generosity” of the Philippine government and its “invaluable support” for the celebration of the events of the Quincentennial commemorations, according to Spain’s defense ministry in a news release.

Robles also emphasized the “special feeling and affection of the Filipino people” in celebrating the annual Philippine-Spanish Friendship Day in Baler, commemorating the “historic events of ‘the last of the Philippines’ 122 years ago.”

Lorenzana said that it was “a meeting of like-minded people, with very deep historical and cultural ties that greatly facilitate collaboration.”

“Both ministers shared their growing interest and attention to the situation in the Indo-Pacific and the vision of multilateralism as the most effective way to resolve conflicts and disputes. They also stressed the importance of working together on the role of the armed forces in the fight against climate change, in initiatives such as the recent conference on this issue organized by U.S. President Joe Biden, which was attended by both countries,” said Spain’s defense ministry.

Lorenzana and Robles’s meeting, which was scheduled since 2019, had to be postponed several times due to the COVID-19 pandemic.

While in Spain, Lorenzana will also attend the International Defense Industry Exhibition 2021 at the IFEMA Madrid.