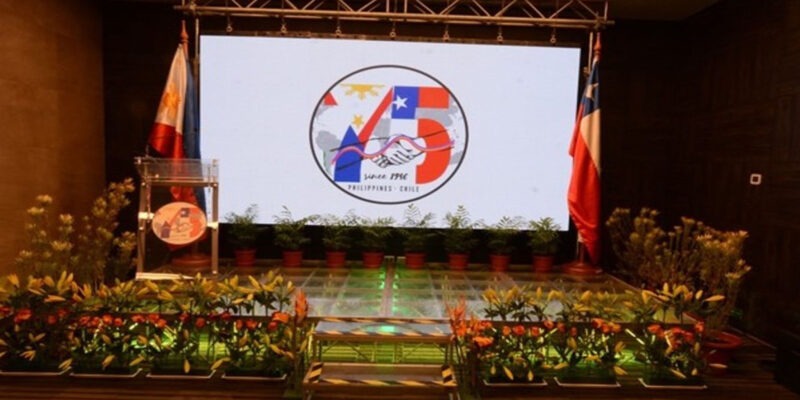 MANILA, Philippines — The Philippine Embassy in Chile and the Chilean Ministry of Foreign Affairs, along with other diplomatic officials, commemorated the 75 years of the establishment of the diplomatic relations between the Philippines and Chile at the Hyatt Centric Hotel Las Condes in Santiago, Chile Thursday, Aug. 19.

Department of Foreign Affairs Secretary Teodoro Locsin, Jr., in a video message, recalled the common Hispanic heritage between the two countries starting from the flagship Trinidad’s crossing of the southern tip of Chile in 1520 and its landing in Homonhon Island in 1521, according to the embassy’s news release. Meanwhile, Chilean Foreign Minister Andres Allamand highlighted the “Philippines’ and Chile’s strong commercial ties, robust political dialogue and close cooperation in the areas of trade, disaster risk reduction, mining, culture, tourism, agriculture and aquaculture.”

Philippine Ambassador to Chile Ma. Teresita Daza, in her remarks, talked about the “importance of safely celebrating the landmark year in spite of the pandemic” and “the evolving people-to-people engagement between Philippines and Chile.” The ambassador also spoke on the “crucial opportunity the celebration presented” to reflect on what the two countries have accomplished throughout the years and what remains to be done in terms of relations.

Daza invited the guests to enjoy a poem titled “Chilipino,” recited by a 5-year-old child named Alonzo Bobillo, and a video of Filipinos in Chile.

The event ended with a cultural festival video prepared by the National Commission for Culture and the Arts’ national folk dance company Bayanihan and the Ministry of Culture’s Ballet Folklorico Nacional (BAFONA) of Chile. The said video featured performances by BAFONA, who sang the Filipino pop song “Ay, Ay, Ay, Pag-ibig,” and Bayanihan, who performed the Chilean folksong “El Gorro de Lana.” The video also included renditions of traditional Filipino and Chilean dances such as “Jota Caviteña,” “Singkil,” “Banga,” “Asik” and “Mate Amargo” — among other dances.

The said occasion was the first physical formal indoor event attended by the Ministry of Foreign Affairs officials and members of the diplomatic and consular corps in the past one and a half years, as the COVID-19 pandemic still continues to affect Chile.

The Philippines and Chile were former Spanish colonies.