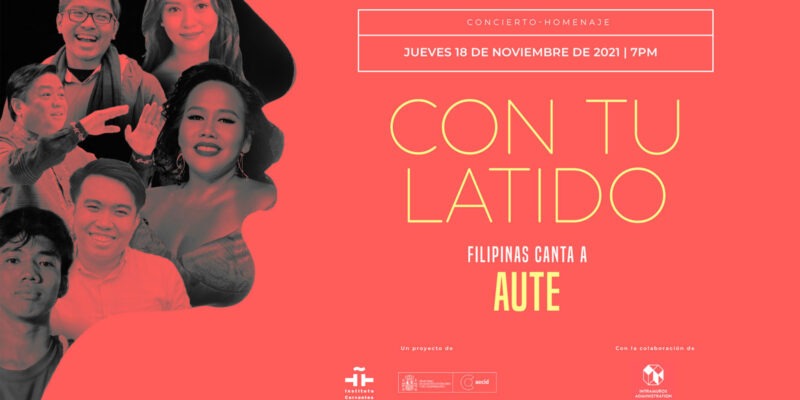 MANILA, Philippines — To pay tribute to the Manila-born artist and musician Luis Eduardo Aute, Instituto Cervantes de Manila and the Embassy of Spain in the Philippines will hold the online concert “Con tu latido: Filipinas canta a Aute. A Tribute” Thursday, Nov. 18. The said online concert will feature Filipino singers who will cover select songs by Aute.

“Luis Eduardo Aute is a reputed artist and popular musician in Spain in the latter part of the 20th century. He was born in Manila on Sept. 13, 1943. His father, a Catalan working for Tabacalera since 1919, married a Spanish Filipina. In his childhood, Aute studied at the De La Salle School, where he learned English and Tagalog. At an early age, he showed unusual ability as a painter and sketcher,” said the Instituto Cervantes de Manila in a news release.

Aute made his first trip to Spain at the age of eight. In 1954, his family eventually settled there. In Madrid, Aute initially planned to be an architect but left the university almost immediately to pursue a variety of career paths — art, film and music.

“By the 1970s, he was creating soundtracks for films directed by Jaime Chávarri, Luis García Berlanga, Fernando Fernán-Gómez, Angelino Fons and Fernando Méndez among others. The 1970s also saw the consolidation of Aute as a singer, with hits like ‘Las cuatro y diez’ or ‘Al alba.’ His successful career saw the following decades with other chart-toppers like ‘Pasaba por aquí,’ ‘Sin tu latido,’ ‘La belleza’ and ‘Slowly,” said Instituto Cervantes de Manila.

Well-known singer-actress Bituin Escalante will render Aute’s hit “Rosas en el mar,” which was released in 1966. Meanwhile, Mark Anthony Carpio, choirmaster of the Philippine Madrigal Singers, will perform “La belleza.” Toma Cayabyab, a member of the Ateneo Chamber Singers and the Villancico Vocal Ensemble, and leader of his own jazz sextet, Debonair District, will sing “Libertad.” Julius Sinoy, who was a Tenor for the University of the Philippines Concert Chorus from 2013–2016, will perform his rendition of “Dos o tres segundos de ternura.”

Other performers include James Barbecho, who will sing “Siento que te estoy perdiendo,” a song that became popular in 1981; Sheila Ferrer, who will cover “Slowly,” a popular Aute song released in 1992; and Ella Castro, who will render her version of “Sin tu latido.”

Spanish singer Rosa León will also join the online concert, and she will do her rendition of the 1980 hit song “Mirándonos los dos.”

The free event will be streamed at 7 p.m. on Instituto Cervantes de Manila’s YouTube channel.